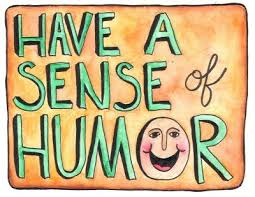 B makes me laugh. More than anyone in the world. Greater than Robin Williams, Margaret Cho or Bob Newhart. He’s wonderfully funny and with his humor he can make a day go from bad to good with just a funny expression. But one of the things he uses his humor for is to combat difficult situations…the kind where oh-so-nasty-honest-to-goodness FEELINGS are involved so he doesn’t have to dig his way into an issue but he can try to laugh his way out of it. He acts kind of like a cat trying to fight his way out of a brown paper bag in that regard.

I do not have a great sense of humor. I mean, I can be funny, but it doesn’t come as natural for me as it does with B. At times my husband has accused me of being humorless. Usually that accusation comes when we are having a disagreement and I am not buying into the humor that he is employing in order not to have to tackle the more difficult problems in our relationship. But here’s the thing…I think knowing when to use humor is every bit as important as having it. Relating a story about how our kid lost his swim trucks in the Polar Bear swim….funny. Cracking a joke when I am asking about how he feels our relationship is going…not funny.

People use humor for all sorts of reasons: calling attention to themselves, telling a story that uses humor to inform and sometimes just to diffuse tension. But when you need to use it to deflect reality and having to dig hard within yourself for tough answers then the joke is on you. Because you are the one who is the ultimate loser whether its insight, opportunity, or eventually the one you love who you later realize needed something more from you than a good one-liner.

There are two times a woman doesn’t understand a man: Before marriage and after marriage