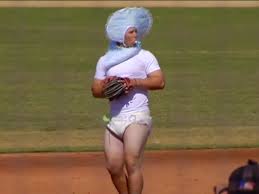 Marriage is like baseball. If you are lucky you get to play in a few extra innings, you make it to home plate more than you strike out and you have many winning seasons. I was reminded of this tonight when a guy showed up at our door to take out our daughter Jackie. He was wearing a baseball cap; his ears sticking out from the sides. He looked nervous, kind of like the rookie on the team, who is up to bat for the first time. And as I watched him look at my daughter I knew without a doubt that he is not “the one.” He’s a pitch hitter until she find the one who hits the grand slam. I suspect that just by looking at her face I will know “the one” when I see him.

I can only hope that our daughter picks well. That she finds a man somewhat like her dad. A kind, caring and compassionate man who puts those he loves in the forefront of his life. A husband who tries hard each and every day. A partner that is smart, funny and shares his feelings. A man that she find as hot 20 years into their marriage as the day that she met him. The kind off mate with whom “the rest of your life” truly means just that, and who, when he envisions the future sees her in every play-by-play, and in every scene. I hope she chooses a husband who dares to dream big dreams and has the tenacity to make them come true. And one that doesn’t spit. Yes, definitely one who doesn’t spit.

I hope  as the game plays out that they both understand that it isn’t the World Series events that pull you apart but the thousands of annoying pitches that you have to take day in and day out and that if you don’t have a loving and positive attitude during practice that eventually you’ll get hit by a foul ball. Anyone can survive playing in the majors but it is really how you handle the everyday minors that count. And I hope that when it is time for them to create their own team that they understand that it doesn’t matter if you win or lose, it is how you play the game. For it is only with an abundance of kindness and giving more than you take that you get to walk in this life together around the bases instead of striking out early on it the game.

3 thoughts on “A Grand Slam”