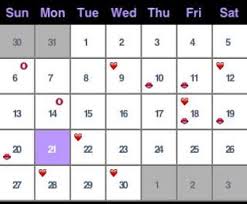 Last month I bought a SEX calendar. No, not one with one position for each day of the year but one to keep track of just how much sex we were having after a not so great comment from B about “slipping back” where sex was concerned. I was pissed as it appeared that the blame was being leveled at me and I was determined to do something about it if only to prove a point. This calendar now hangs on the bathroom wall for easy access so no one “forgets” when we did the dirty deed. Problem is with three teens in the house one just can’t be writing SEX all over the place especially special days like their birthdays. So I have had to become inventive in order to keep track of who did what to whom.

My first entry “B fixed the closet” was a little farfetched but I figured it would work until I wrote it a second time and Gracie said, “What is wrong with your closet and why is dad always having to fix it?”

So I then went to a capital S with circle around it. Andre asked me why I was marking Superman on my calendar. Although it may fit B in the bedroom I quickly got the point that I needed to change my records keeping ways.

Paul asked with the star was about and if it had anything to do with the cycles of the moon.

Frankly, all this calendar watching by the kids was  getting to be a tad annoying. I mean can’t we have any privacy even if it is just on paper?

So I have had to invent a series of codes

IDIOT-I did it on top

And so it goes.

Unfortunately, we have not had much chance to use these secret sex codes as of late. Between freezing in Tibet, me in Chicago for a week, Nicole with grand babies here necessitating Gracie sleeping in our room, B being sick, me being sick…well, let’s just say the odds have been stacked against us. But yesterday Nicole left, Gracie returned to her own room and late at night we had sex. Finally. Happy, Joyous, Lovely. SEX.

Let’s just say the earth moved and the richter scale said it was a 5.0  which was not bad for two old folks with kids in the house.

Onto my calendar went GRITS

But in morning after taking the kids to school as I was cleaning my bathroom  I noticed handwriting scrawled on the calendar other than my own. It read “Can you keep it down please some of us are trying to get some sleep!”

How embarrassing! I think we will buy the little dears ear muffs for Christmas next year!