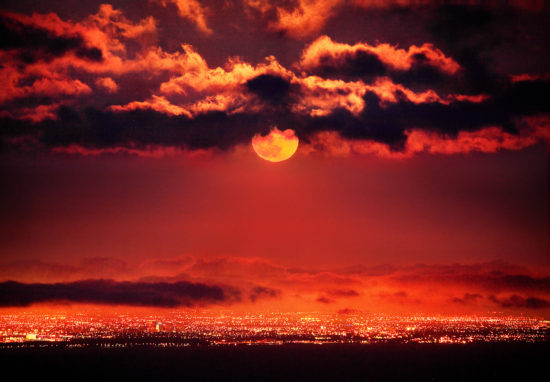 Tonight, the first night of summer to be exact, a strawberry moon rose steadily from horizon to that place so high in the sky that it appeared to take up almost all the space in the galaxy, leaving room for nothing but a few pulsating stars. The moon’s color was like a Mary Magdalene rose…fluffy and full the luscious golden pink  tinged color. I have seen better strawberry moons where the sky had the hue of a hearty David Austin Sharifa Asma rose, it’s brilliant pink filling the night sky; but if you were just looking for something like a miracle of nature, the other night would do just fine.

As B and I held hands in awe, gazing at the nights passion play, I thought about how the moon had changed from when I was a child. Back then, I would search for the Man in the Moon, who seemed to hide in delight every time I tried to get a glimpse of him. Later, as children arrived and the busy demands of motherhood intervened; I stole quick glances at the sky seldom appreciating the miracle that was unfolding above me. But tonight, my appreciation for the moon peaked when B said, “I love to see the glow of the moon as it shines over you.”

These days as I settle into the later part of my life, I see in the moon what I see in myself. A creation that is glorious in its simplicity, sparkly, and has no ambitions to be anything but what it is…a moon. Like the moon I wish to be appreciated for the light that shines outward from me and for producing those joyous high tides can help change the landscape around us.  And as moon also provides stability to the earth, its gravitational pull ensuring that we don’t spin violently out of control, I would like to be seen as possessing that kind of dependability and support to my family and friends as life shifts around us. And while the moon is moving away from the Earth at a rate of 4 cm per year, I would like to think that when it is my time to move on that I will have left just enough light in my children’s lives to guide them even when clouds linger overhead.

For I am like a strawberry moon…I am brilliant, full of life, and just freakin’ spectacular.