The other day we were driving up to the cabin. The wind was quiet and the sun bright as we climbed higher into the mountains. It brought me back to a year ago when I was making the same drive. My marriage was a mess and I was a wreck. It seemed like nothing was ever going to get better and I wondered if I was ever going to feel happiness again. Last year it was a hard drive and I made it alone.

This year the drive was different. The wolf spiders were out along the roads doing their mating dance. 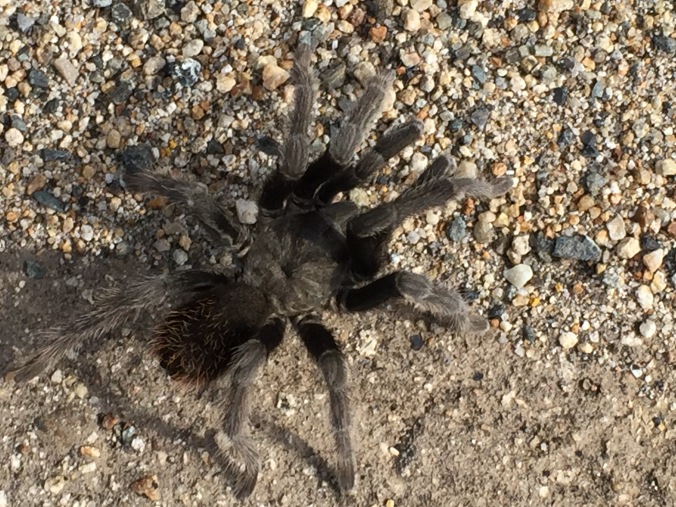 The leaves were just beginning to turn with brilliant yellows and a few orange ones dotting the landscape. The birds were singing and the deer were just frolicking with one another in the backyard. We also felt lucky as we saw large embers from the fire laying on our deck knowing how easily the cabin could have gone up in flames as the embers were carried by the wind.

B and I just enjoyed our time together and wished for nothing more. It was a fantastic day.

When it was time to leave we opted to try a different way home. It was a road we had never ventured on before and we hoped to see how close the big fire of a month ago had made it to our cabin. About a mile from our place we left the pavement and headed down a dirt road. Further and further back we climbed until we could look back upon the entire valley. It was clean and clear. No sign of a fire anywhere. We climbed higher, the trees in thick clusters, more colors to their leaves. We were high on the mountain and you could feel the tightness begin to shape your lungs like the blue rubber bands you find on bunches of celery in the grocery store.

Finally, we came to another paved road. Here we found signs still mounted on the trees which read THANK YOU FIREFIGHTERS and STAY SAFE. But still no sign of the fire itself. We saw the red fire-retardant splashed on the road that had been dropped from airplanes that once buzzed through the smoke choked sky. But there was still no trace of the devastating fire that had ravaged the mountains just one month ago.

As we descended, we realized that we were on the backside of the mountain which usually takes us up to the cabin. It felt like an entirely different place. Long grasses lay flat and swirled around massive tree trunks creating a kaleidoscope of colorful designs.

Huge boulders the remnants of dinosaur days dotted the landscape in odd places looking like they had been dropped there by some humongous creature playing chess. It was the other side of the mountain but it could have been worlds away from where we had started.

Finally, after another 10 miles we made it back around to our usual road, the one that could take us back up the mountain. As we hit that mile marker I realized that our marriage in the past twelve months and this trip to the cabin shared many commonalities. For over this past year we had the courage to take an unfamiliar road which brought us new things to see/contemplate which eventually brought us to a happiness/coziness that we find amongst the trees. We also fought the flames of divorce, and while we did get singed, we didn’t get burned. Our marriage, just like this new road, looks different from the other side of the mountain at which we started our trip.  And today, more than at any other time during this journey; I feel blessed that we were able to traverse the vast unknown and make our way safely home from the other side.