If you have read this blog before you know that I have been struggling with B’s decision to take a “business” trip to Asia without me. For the past several years we had gone together to try to build closeness in our fragile relationship. I appreciated those times together, the shared experiences and, of course, time away from the kids. So I was hurt when he said he was going alone. Then when I asked about something that seemed odd he admitted he was going somewhere else too. I fretted and wondered if he would have even told me about this new itinerary and I felt betrayed because it brought back past business travels in which odd things had happened. But it was more than that, this anxiety I was feeling, anxiety that felt all consuming and I couldn’t figure out where it was coming from. Until one night I realized it was rooted in fear from the past. Fear because the last time we were apart for 10 days, when I arrived home he wanted a divorce and it brought me back to two years ago when I lost my rudder. I can only imagine this is what PTSD feels like. Bleak, scary and uncertain.  And while I knew that our relationship wasn’t in the same place it was back then my raw emotions couldn’t process that fact for emotions are funny things and whether accurate or not they pull at the soul and can stretch you out of shape.

So now he is away on “business”and not a “vacation” as I insist it is. And B didn’t bother to tell me that even though he would arrive in the wee hours of the morning on Saturday, he wouldn’t actually be engaging in any sort of business activity until Tuesday. I’m sorry, in my mind that is a vacation. Now I could be really upset about this. Not that he wasn’t really doing the business that he insisted he was but upset because once again the pattern of 1/2 truths has appeared to prevail. But this time I am working on really trying to see this in a different light…I hope I can succeed.

It has taken me a while to realize that not everyone loves us in the way we think we need or in the way we would like. Often, they just love us in the way that they are capable of loving us often to our disappointment or dismay. If life were ideal I would have complete and utter honesty but that is uncomfortable for B because he grew up not being allowed to express his feelings and he doesn’t feel he can express his feelings to me.This hurts though I have brought some of it on myself. B feels that to express his needs is shameful or selfish and as a result he hides them to himself and from others. So while I would have loved for him to be honest and say “I don’t have any meetings until Tuesday but I have decided that I need a few days to relax and have a few days of ME time,” he couldn’t allow himself to do that even though I asked him to just be honest and admit he wanted time alone.

So instead of being upset about the fact that he was a little less than honest I am trying to see his actions as those of a man who cannot ask for what he needs. A man who does not believe he deserves time alone. A man who believes anything he wants that does not involve his family is selfish on his part. Sure, I wish he had just been 100% honest but if I look through into his soul I know he is incapable of focusing on himself. And so I am trying to let go of the fact that he cannot love me as I wish but instead loves me as he can. It is flawed and sometimes it hurts but at this point in life this is how he loves. So I can choose to be angry or I can choose to accept knowing he is doing the best he can at this point in time. Today I choose acceptance…I hope I will choose it tomorrow too! For I deserve it and so does he. 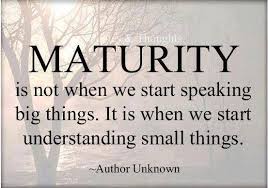