Sometimes, when we least expect it, something happens that forever changes the dynamics of your family. In our case, it appears to be Batman.

On Halloween, son #3 was outside trying to hand out candy to the local youth. Since we recently moved here we went all out to ensure we could meet local demands and based the quantity of candy needed on our old neighborhood numbers. We bought 600 pieces. This was a mistake of epic proportions.

We had ONE trick-or-treater. ONE. This, of course, means that I must personally consume the other 599 pieces within one week in order to ensure that said candy does not expire. At this point I will need to eat 300 pieces tomorrow and 299 the next day. But who is complaining? According to my calculations to burn off this amount of candy I will need to stay at the gym until the last of my still-in-the-nesters reach 18…and that is another four years. Good luck, Dad! It’s my turn to stare at the buns now!

Anyway, besides the lone costumed candy kid, there was one more creature that hit our driveway on Halloween night. As related by son #3, he decided it was time to take a look around after hearing strange noises as he sat waiting for the other 599 children to show up at our door. Imagining spooks, grim reapers, and the like out for his head; son #3 was pleasantly surprised to find this creature of the night which was immediately brought inside and cuddled. 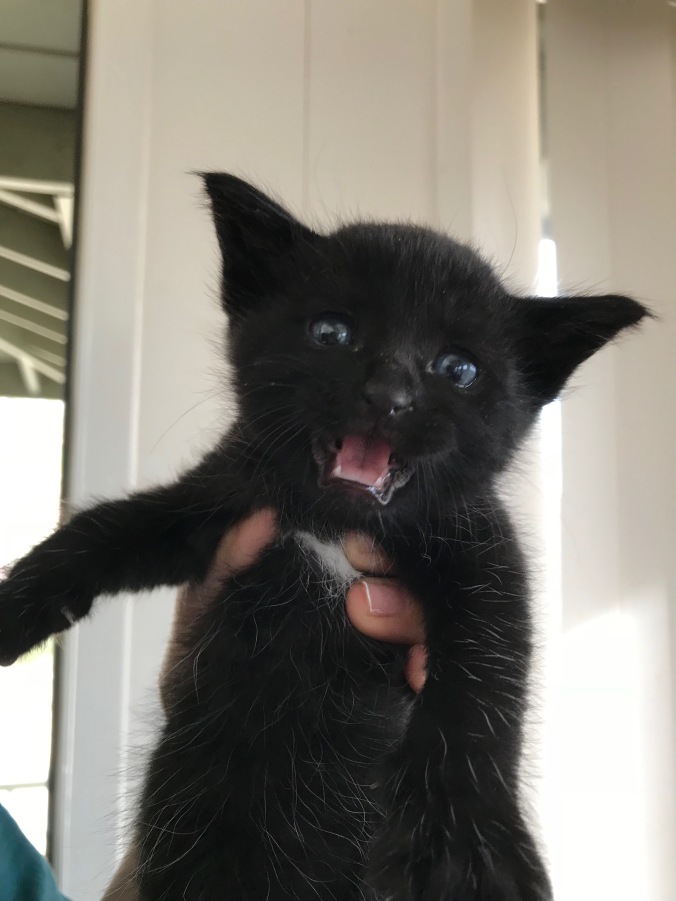 According to the vet he is 5 weeks old and very healthy for a wild kitten. He weighed in at 15.5 ounces and his vocal cords are very busy. Due to all of his “talking” there has been a divide in our home as one contingent wants to name his Chairman Meow while the other insists that Batman be his moniker due to the pointy ears and the fact he is nearly all black. But this isn’t the only issue facing our young feline friend.

I have always believed that you are either a cat person or a dog one. I grew up with cats but when I was old enough to have a home of my own; canines became my companion of choice. But then this cat shows up completely unannounced and uninvited. For our boxer mix this cat is a menace and because of his DNA he likes to chase and kill small rodents. It is obvious that he considers Batman is of that ilk (small rodent) and his proudest moment would to be to serve Batman up on a platter as a nice tasty dinner for his human friends. Obviously, perspective is everything.

The other hurdle we have to overcome is Paul’s previously severe allergy to cats. Thus far, it appears that the weekly allergy shots for seven years are paying off. There are no itchy red eyes, swollen faces or sneezing going on here.

So for now, like it or not, it appears that Batman is here to stay. Doors are now shut to keep dog from cat and cat from kid. Earplugs are worn to keep us from hearing Chairman Meow’s views on everything under the sun. So while this cat issue remains up in the air for now one thing no longer is. Next year I am making everyone stay indoors on Halloween.