First of all, my regrets to the beautiful town of Paradise which lost so many in the fire. Same with Concow. There are now over 6,400 homes that were destroyed and there are over 50,000 displaced persons. Also, for the history lovers the Honey Run Covered Bridge was destroyed. It was a much loved landmark in the area where everyone went to have the senior high school pictures taken and many weddings were held. Built over 100 years ago it was the only three-span bridge remaining in the USA.

So far we have evacuated once. Not because it was mandatory but because the winds were suppose to be 50 miles per hour at night and I didn’t want to drive in the middle of the night along with 50,000 other people who were trying to leave. I watched the videos of those who were driving through fire on both sides of them, embers flying around and no visability. That is not the way I want to die so we went and stayed with my cousin for the night and returned the next afternoon. The car is still packed and ready to go if need be.

We have offered a large room in our home but thus far no takers. Sometimes it seems so difficult to be  able give and get disaster relief to those horribly and truly impacted people. I wish it was easier to connect because I know people are looking for shelter and I cannot imagine cots are too comfortable.

Today it was announced that they have found 42 deceased persons in the area and over 200 are still missing. This makes the Camp Fire the deadliest in California history. Don’t even get me started on what our bone-headed leader said about the situation. Too bad he didn’t just get wet while in France and melt like the Wicked Witch of the West. I suspect that is the real reason he would not attend the ceremony in the rain!

We are watching the fire creep slowly towards us but the winds are dying down so I am not expecting that this monster fire will reach us. Thank you for all those positive vibes. That said, the smoke is thick and ash floats down like snowflakes. My outdoor furniture has a layer of soot coating it and my head hurts from all the smoke in the air.

Paul was burdened after visiting the evacuation center and became concerned that we would lose everything too. We explained that nothing else mattered but the love we had for each other and for our family in general. Everything can be replaced… but people… and while somethings are dear to our hearts, if lost, we can find other things to replace them. Nothings Real But Love!

It was an eerie day hearing the helicopters down at the lake scooping up water to pour on the fire. Yet, with such thick smoke blanketing the area I could not see them. I heard them coming and going all day without one visual verification that they were truly there.. It makes me wonder how those pilots keep safe and I have to give them a big salute for all they are doing to try and keep us safe.

Since we just moved here we really don’t know many people but when I go to the store I hear the stories of personal loss and it just breaks my heart. Someone’s grandma gone. Another person’s uncle still missing. Pets left behind because they were so scared they ran off and their owners had to leave without them.

B and Paul went to the evacuation center in town to help out on Saturday. They said it was the saddest thing they had ever seen… so many traumatized people who fled with only the clothes on their backs which make what I am about to say so ridiculous. While they were there they were instructed to hand out clothing to all these people who had no clothes but what they were wearing when they left two days before. As these needy people were getting free clothing, the state health department came and shut the hand-out down, stating that the clothes had to be taken and sanitized first. What a bunch of crap! I wrote the Governor and other officials stating at times like this common sense needs to prevail and rules need to be bent when at all possible.

Today, I made the kids come out and remove leaves from the backyard and the decorative bark away from the house. They complained so much that I think that they need summer jobs detasseling corn or picking fruit. Good old hard, sweaty labor might just cure the “Princess” nonsense that is going on in this castle.

Here are some pics from the fire. Please keep California in your prayers. 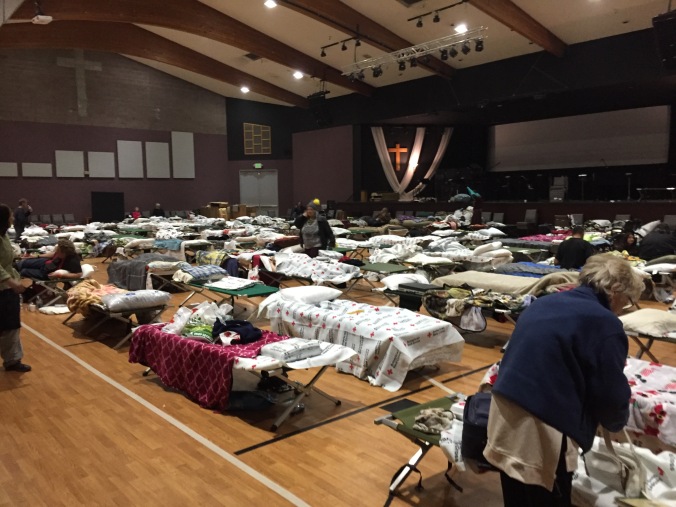 Saturday-Smoke starting to fill the area 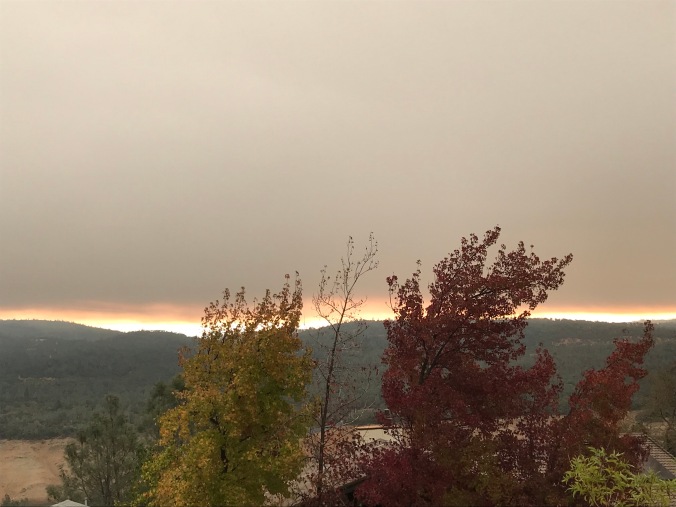 A street 5 blocks from us

Smoke in my backyard 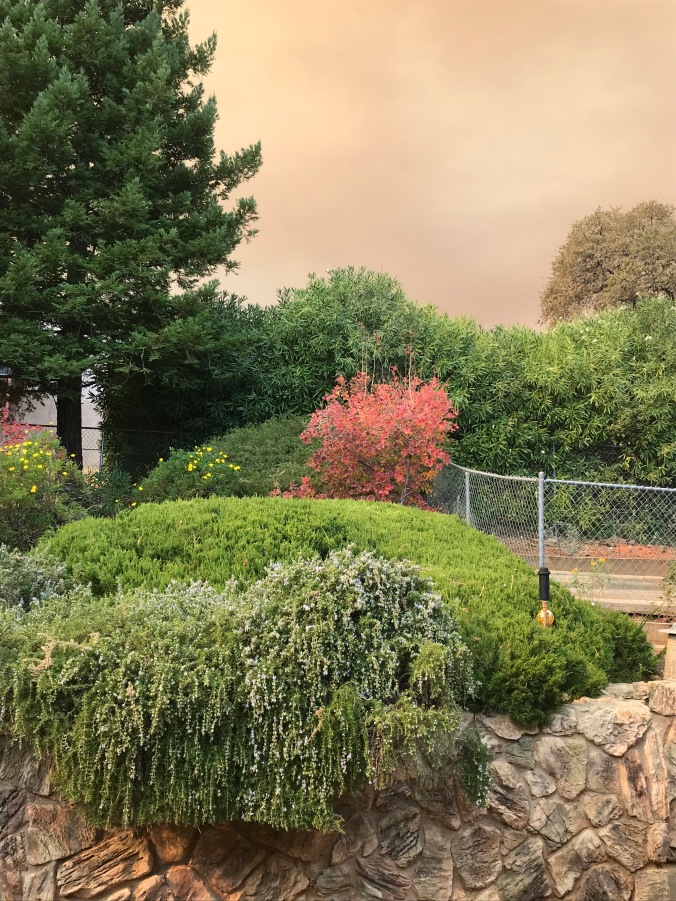