Today, is a busy, busy day. Doctor appointments, therapy appointments; you name it this is the day it has to be done. Therefore, I am unable to write today. Instead, I am leaving you with a story that I wrote seven years ago. 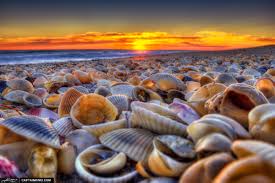 Seashells By The Sea Shore

For me it is the end to the perfect day. The wind is blowing softly and the sandpipers are scuttling along the shore while the sun’s golden glow shimmers as it sinks below the waves. My six-year-old son skips alongside the sea, his jet-black hair flying behind him. He delights in the unfamiliarity of the shore songs that greet us and offer up the oceans bounties…shells of many colors: brown, tan, black, white and an occasional tinge of pink. He runs collecting both big and small. Paul scoops them up, washes them off, and dumps them in the bag as we make our way down the beach. I help pointing out the errant ones that he has missed along the way. But of course, I leave the chipped and broken shells whose imperfections make them less than a desirable collectors item.

“Mom, LOOK at all my shells,” his voice booms. “There are hundreds of them.”

I peek my head into the bag. Bits and pieces with jagged edges greet me.

“But Paul, these shells are all broken,” I say, trying to be helpful. “Why don’t you collect ones like this?” handing him a perfect specimen that has just washed ashore.

“But Mom, they don’t have to be whole to be perfect. They are beautiful just the way they are. God thinks that about you too.”

And with that, he looks into my eyes and holds my gaze with those deep brown eyes of his. Then he reaches in the bag and gives me a dirty black shell, the majority of whose pieces are scattered over the bottom of the Atlantic. Yet, when I turn the shell over I see he is right. The center makes a perfect circle which circles back upon itself. The color is uniform and is as dark as ebony. And as I stare at that shell I suddenly see my son within it. They both have a few cracks and even some missing pieces. Suddenly I come to the realization that they are indeed both perfect just the way they are.

Sometimes it just takes a six-year old boy with autism to remind you that perfection is in the eye of the beholder and that it is all around us just waiting to be discovered.