And it can get boring. Very boring.

Several years ago THE GIRLS and I were sitting around drinking a little wine when the conversation turned to sex. No, not the Birds and the Bees type of sex talk but the We’ve been married a long time and its getting a L.I.T.T.L.E. boring around here, kind.

After various positions had been discussed along with other “Let’s Get Our Groove Back” unmentionables; we came up with a brilliant idea to solve our less-than exciting sex lives. And it involved the very short but strangely sexy and debonaire … Mr. Potato Head. (Don’t you dare go there!) 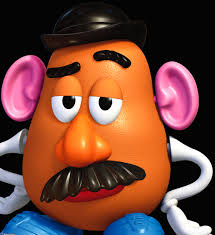 Yes, Mr. Potato Head improved our sex lives to the point that he should have become a national shrine visited by bored and complacent couples everywhere. He was our Rati, our Eros, Our Hymen and our Yue Lao all rolled into one. In short, he became our sex guru.

So how can Mr. Potato Head solve the problem BORING sex? Easy. He is the prize. He is the mascot. He is the winner-take-all.

Here is how it works.

Every month a new category is placed on the table. These include such places/things as:

After a month of valiantly trying to best each other, THE GIRLS would meet over dinner and a little wine to discuss our sexcapades. After the stories were told (pictures were optional) there was a vote to decide who got to take home the coveted Mr. Potato Head. Winner-take-all. Then the next month’s topic was chosen.

Unfortunately, all THE GIRLS have moved away from one another and the original Mr. Potato Head has long since disappeared into some unsuspecting kids toy box. But three weeks ago in an attempt to spice up our sex life I went to the store and bought a new Mr. Potato Head. He’s a silent spectator (what a voyeuristic little dude) sitting on the top of our bed watching as we “go at it.” And although we are only passing him back and forth between ourselves he is an indicator of our commitment to finding our way back to one another.

3 thoughts on “Great Sex With Mr. Potato Head…331 Days To Fix This”