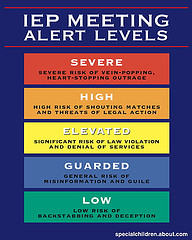 For years we have been fighting our local school district to get our son what he needs in order to learn. Comprehension is sometimes difficult and math often impossible. We have watched him struggle to learn things that others grasp without effort while the school district ignored our concerns. Yet, if he is taught using particular methods he is often able to do the work that is required. Unfortunately, we do not yet know some of the methods that he would benefit most from.

We first realized he was having difficulty with math in first grade. We brought it to the attention of the IEP team. Our concerns were dismissed. In second grade, “It just takes some kids longer.” In third grade, “So he won’t be at the top of his class in math. (Yeah, duh!)” We then paid for him to go to an after school program at the cost of over $400 per month to learn his multiplication tables which the district could not manage to teach him. In fourth grade, he really started slipping but it was “Well, we can’t do anything now because he isn’t failing.” The rage I felt was immense. We were trying to be proactive but the district wouldn’t take our son’s lack of being able to understand and apply concepts seriously. By fifth grade they couldn’t quite ignore it anymore but their solutions and IEP goals were meaningless. He is now in 8th grade and doing math at a 4th/5th grade level. SIGH. I can also say the pathway has been similar for reading and comprehension but not as difficult or severe. In retrospect, the things we would do differently are numerous including taking the school district to Due Process. But the end result is that we have refused to sign his IEP for more than two years and continue to work with an outdated one.This, of course, is beginning to make the district nervous for what it means for them should we instigate legal action.

One of the things we have been fighting for is a GOOD educational/cognitive/psychosocial assessment of our son as we have disagreed with the district’s findings. We feel this is the best way to discover the issues that are effecting his learning and how he needs to be taught to reach his full potential. We have had a well-known and respected doctor in mind to do this assessment who specializes in kids with multiple “things” going on and have been fighting for the district to get him seen by him. Thus far the school district has refused citing their policy (which is illegal, BTW) that IEE’s must be performed within 60 miles of our home. If you understood where we are located you would also know that these types of services are not available here.

It has been a long, hard road with often disappointing results and constant stonewalling from our school district. But after all this time we were just notified that they have agreed to this testing and with it comes a very belated victory for our child which has cost him dearly due to these very purposeful tactics and delays.

Unfortunately, no family should have to go through this. Yes, we have at times hired a lawyer to push our case but the cost is immense and we see very little action for the money spent. School districts often stonewall because most parents cannot afford legal services, they don’t understand the law and districts know that most parents get weary of fighting “the machine” and give up. It’s hard not too. When you are already struggling at home because of the way your children’s disabilities impact your home life taking on a huge school district seems impossible and the educational system counts on that. Yet, by not doing right by our children it puts a future drain on our economy because these kids get discouraged by their lack of understanding/comprehension/accomplishment and drop out of school. They then face a life-time of unemployment or underemployment and the use of social services that could have most likely been avoided had they had some measure of success in school. Prison and gang activity is also a direct measure of the failure of the educational system.

I wish I could say it has been easy but I can’t. In fact, fighting this battle against the local school district has contributed to our ‘almost divorce.’ But I do urge all parents out there to continue to fight for their children’s place in the educational system. I have to believe that eventually we will make a difference.

2 thoughts on “IEP Services From The School District”