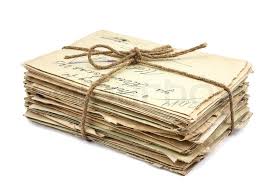 Recently someone contacted me (after finding my family tree on a genealogy site) saying that they had found a box of letters from 1912 from my 2nd Great Aunt (I’ll call her Mary) to her then boyfriend who later became her husband. She had three boys from an earlier very bad marriage and in stepped (I’ll call him Ned) to love and cherish her and the boys. Not many men would have had the heart or the courage to take it all on but he did and I know that Mary and her sons were blessed to have Ned in their lives for another 51 years.

There are about 40 letters in all and they are courtship letters. Mary and Ned were separated at the time by two long train rides from one another and they were trying to find a way that they could be together as a family but things were hard and there was not a lot of work where my Aunt lived, so Ned went to the “Big City”  to look for work. One of the bonuses of these letters is that my Grandfather is mentioned in them twice. He was about seven at the time. In one her letters to Ned, Mary says that my grandfather said to her son, “Do you think that man is going to marry your mom?” He replies “I reckon they might.”

Throughout all the letters there are pronouncements of practical love and a few glimpses of passionate love too. In one letter my Aunt talks about what might happen if they were to work together and says, “But if we do you have to promise to keep your hands off of me while at work!”

These letters are nice reminders of how early in relationships we do our best to impress, to praise, encourage and to believe in the possibilities that lie ahead. I think that is often missing as marriages mature and the letters have reminded me of just how important those kinds of gestures are in everyday life. Mary and Ned’s belief in their love and their future together is strong and its an overriding theme throughout their writings. It was important to them to believe and celebrate what they had and what they had found in each other. It’s some thing I want to rediscover in my relationship too.

Ever since B brought up the”maybe divorce” I have had difficulty celebrating what we have had, what we do have, and what we might have. Yet, as Mary and Ned have shown me celebrating a relationship and each other if important. It is a must do and it serves a much needed purpose to foster love and a sense of connection. So I have decided that if I want B and I to be a couple, I have to live like we are a couple and act as if we will be together forever. I have to believe in the possibilities that still exist for our marriage if this relationship is to survive. I must: