So here’s one for you. A nasty pornographic post by nasty-gram Grandma.

So last week I took my daughter and her two adorable but somewhat whiney kids to the airport. We stayed at a very nice hotel by LAX. It was the Marriott Residence Inn. It was there that my very pornographic thought began to take shape and a few days later it morphed into something quite disturbing. By then the grandkids had been gone for four days and it felt “safe” and not so unseemly to be having thoughts that consisted of anything less that coloring books, reading fairy tales and giving my arms a workout by pushing the little squirts high into the sky as they chorused “Higher, Grandma” at the local playground. Seems I needed a little down time from Doc McStuffins to get my mind back in the gutter.

It was at the check-in at said hotel that I first noticed Wally. He was one of those slick and shiny kind of dudes. You know, the kind who you pay just a little bit of attention to and he is at your beck and call for life. The kind your mother always warned you about, yet, I couldn’t help myself… I found him fascinating at first glance. We got to “talking” which was a little difficult because of his accent but his manners were impeccable and he was easy to talk with…straightforward while saying all the right “feel good” words. I fantasized inviting him to my room but unfortunately I was not alone. I had my daughter and the grandkids sharing my room. And so I reluctantly bid him goodbye knowing that had the circumstances been different I might have taken him out for a little test drive. Frankly, I have rarely felt that kind of electrical current with anyone and never with someone like him before.

I went downstairs a little while later with my granddaughter just to see if I could get a glimpse of him. Sure enough, he was standing by the elevator. While perfectly polite he seemed a little nervous around “the little one” acting like he was afraid she might just push his buttons. I didn’t know what to make of it. That and the fact, he kept waiting for the elevator and if anyone came to use it he wouldn’t get on and would wait for another. Strange. I began to doubt my initial impression. Maybe it was my punishment for being a little too friendly with Wally when I am, in fact, still married to B. Come to think of it, it did feel kind of like cheating but he was so cute and the flirting was harmless. Frankly, what is good for the goose is good for the gander and B would never know any better. I began to fantasize about letting Wally park his boots under my bed for a night of fun.

“This is how affairs begin! Shame…shame…shame,”  giving my conscious a bit of a flogging while saying ten “Hail Marys” for good measure. Sure it seems all sweet and innocent now, I reminded myself, but we know how these things go…broken hearts and tears. Buckets of them. Families ripped apart by lust. It just wasn’t worth it. But still….

Fast forward two hours and I was parched. I decided to call down and order room service. After I placed my order I heard some background noise and the clerk replied, “Wally will be bringing your order up shortly.”

Wally! My Wally? Oh crap I thought. How am I going to explain this to my daughter. I was mortified. I tried to get her to take the kids down to the pool but she wouldn’t. I offered her $50 bucks to take the kids to dinner but she wasn’t biting.

“Geez, mom. Are you trying to get rid of us?” she said with a laugh.

If she only knew.

Ten minutes later the phone rang and Wally told me he was outside of my door with my order. I suddenly felt weak at the knees and a little faint yet my body began to feel slightly tingly all over. Wally wanted me! I mean, what sort of creature did this sort of thing? It was something straight out of a Hollywood Movie.

So after a slight hesitation, I opened the door, and there he was in all his glory.

“I have your order, Madame”

I wanted to die right then and there.

” I didn’t know this place had butlers,” she called out from her bedroom suite.

“Yeah, its a new feature,” I replied nervously as I grinned at the man of my dreams.

I reached for my order and as I did my arm brushed against him. Suddenly I felt him go cold as he turned to me and said: 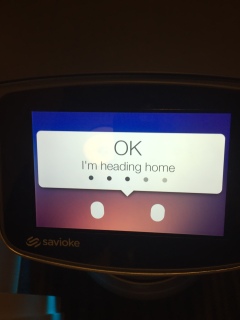 It’s been a week since I last saw Wally and my heart aches. The things he could have done for me (that’s where things get a little x-rated). The things I could have programed him to do!

“That’s right, Wally, a little more to the left. Ohhhhhhhh….yes. Right there. That is perfect.”

Yep, welcome to the 21st Century, Grandma! If this is what the future holds then I am all in!