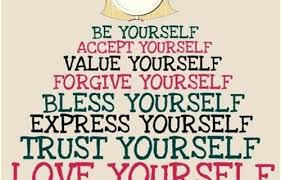 Several weeks ago an older woman walked up to me and told me that she really liked how I talked to my son. I was shocked because I did not feel that I had done a good enough job to merit that type of praise. In fact, as I often do, I felt as though I had “kind-of-sort-of failed” in my response.

Later as I reflected on the moment I thought, ” Why, if a stranger can be so kind to me, then why is it so difficult for me to be kind to myself? Why do I seem to negate recognizing the good that I do each day? Why is it I always feel the need to do better?”

As I have contemplated this the last several weeks I have realized that I often end my day examining those things that I feel I have failed or done a less than spectacular job at according to some invisible standards I hold for myself. And so, I have been contemplating and asking myself: where did these standards even come from and what makes me give them the validation that they so often don’t deserve?

In response to this, I have begun a nightly ritual in an effort to change this part of my life. Upon laying down in bed at night, I hug myself tight, and make a mental list of all the things I did right that day and if I am in doubt about one of them I give myself a win anyway. At the end of this recap I am write down the improvements I have seen in myself as a way to encourage myself as I take this journey through life. I give myself the chance to see the positive through a lens of critical assessment that I have lived with for a very long time. At times, It has been difficult to see positive change because I am so used to being harsh with myself, but little by little, even though I may fall short of my “invisible standards;” I am finding instances in which I deserve my own pat on the back even though I have not behaved perfectly. And I find, that when I wake in the morning I seem to be much more optimistic than I had previously been.

Often newly married couples are given the advice not to go to bed mad at each other because it leaves a sour taste in your mouth the next morning. The same could be said of ourselves. Going to bed with negative thoughts begets negativity in the morning. So try noticing your good points and successes throughout the day and run through the list before retiring for the night. You might just find you sleep sounder and wake up feeling refreshed.