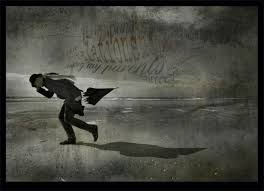 I am struggling not to go there. Not to go to the dark part inside myself that sees things in the shadows that may or may not be there. That part of me that is distrustful when it is not warranted because my issues with distrust developed when I was a little girl so many years ago and are exacerbated by the unexplained things that sit in my Place of Mysteries.The Place of Mysteries…303 Days To Fix This The place that calls out to me from under the door “Look at me now. Look at me, even though your information is incomplete. Go ahead jump to the worst conclusions.”

I am desperately trying to hold myself back from this sort of thought process but I am finding it difficult.

So here’s the thing. When B was at camp I had the chandelier hung. I also had a broken electrical outlet replaced with a new outlet that also has two USB charging stations incorporated in the design. This new outlet is the same place where B has charged his phone for the past ten years.

A few days after he returned home from camp, as I was going to bed, I noticed his phone was not at the station charging so I decided to go find it and plug it in for him. I was trying to speak his love language by doing something kind, but I couldn’t find his phone anywhere. Strange… but I didn’t think too much more about it.

Anyway, the next day I noticed the same thing. And the next and everyday since. Again the phone is no where to be found and is not in the place he has charged his phone for the past ten years. B usually gets up about an hour earlier than me but today I got up early and his phone was charging at the charging station. Last week I kind said, “I noticed you aren’t using the charger.” He said something to the effect he liked using the plug in and I didn’t really think anything about it…but now I am.

I guess I am concerned because most people don’t suddenly change what they do unless there is a reason for it. I am confused why there is this sudden change of habit and a phone that is out of sight when it has never been this way before. I want to know the reason. Maybe it is something simple or maybe not. Yet, with the new found attempt to re-kindle our relationship I am afraid that if I bring it up it will cause problems and the “you don’t trust me” statements will be hurled at me like a cannon ball.

I will say here that I do not know B’s password to his phone and I have not looked at his phone for over a year. We used to have each other’s pass codes but I have not had his for a year and frankly I am assigning meaning to that lack of information and perhaps I should not. Like it is some sort of tell-tale sign of the health of this relationship especially since it was not that was before.

Frankly, I am not even sure that this wondering of mine has to do with not trusting or if  it is more of a sense of curiosity. A wondering if this has implications that I am not even aware of which makes me unnerved. That these new behaviors B is exhibiting are saying something about our relationship in some sort of foreign language that I don’t understand.

I don’t like this…this feeling of secrecy and tip-toeing around afraid to ask legitimate questions. And as time passes I often wonder if this is the way I want to live. I am an open book. My computer is always open and my phone is available to anyone who wishes to see it. I think that this is what I am wanting in my relationships. Transparency.

I don’t know if transparency is the norm. All my friends have access to their spouses phones, computers, etc. Is this important or not?

But still, I wonder, does this indicate there is a problem in other people’s marriages or mine? I guess time will tell….and there goes my positive post pact. SIGH.