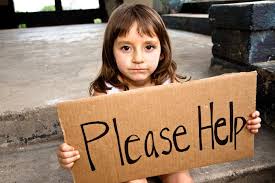 Sometimes the poverty that exists in this country just blows me away but what blows me away even more is the politicians that have no regard for those less fortunate than they. I have come to believe that before any politician can actually take office they should be forced to live in the middle of any city with their families, they should have to survive on food stamps, and should life without health insurance. They would have to live in buildings that long ago should have been condemned, have to take their clothes to a public laundry mat, and have to rely on public transportation wherever they go. I suspect that most would be so far out of their element that they would die of fear. Hearing guns going off constantly and living in economic chaos will do that to you.

Meet Sadie. She was a product of the foster care system until she became an emancipated minor at 16 years of age. At that time she was pregnant with her first child.She had nothing when she was pushed out into the world and she still has nothing except a broken-down rental, no furniture except a worn-down worn-out mattress, and no stove. She was never cared for properly and because of this she doesn’t believe she is entitled to anything more than she has ever known. She doesn’t think she should be doing better because she has never known what “better” is. What she sees on her neighbors tv (she can’t afford one) is just a fairy tale and not attainable to “someone like her.”

Sadie had another child by the time she was 18 years gold and things were going well until her husband died unexpectedly. Depression hit her hard and she couldn’t get the mental health support she needed. Currently there are 14.1 state mental health hospital beds per 100,000 people which is essentially at the same level as in 1850.  Because of this breakdown her children went to live with their grandmother and her guilt is immense. She wants them back but knows that they are better off where they are so she puts them first before her own desires. I think our elected officials could use a little of Sadie’s “doing the right thing” towards others mentality.

Sadie met another man and once more she found herself pregnant. She couldn’t afford birth control and there was no Planned Parenthood available. Her baby died at birth in the hospital. She doesn’t know how or why and regrets that in her sorrow she did not demand answers but she wouldn’t have known what to ask anyway she tells me. When you are poor you have no power and you expect nothing.

She’s pregnant again and her boyfriend is in jail. Hopefully, he will be out to be at their child’s birth but Sadie isn’t sure. She didn’t have the money to post bail and so she waits hoping that the judge will see what she sees in her boyfriend…a caring human being with flaws.

Maybe if a politician or two were to live with Sadie for a month they might come to understand that when you aren’t born with a silver spoon, when you haven’t been to the best schools, when you haven’t had parents there to meet your needs, when you were forced into a foster system that often exploits rather than nurtures, when you aren’t tall and beautiful, and when you don’t have an IQ of 120 that life is just tougher. Period.  Unfortunately, our rich representatives do not understand that they did nothing to deserve their good looks, their good parenting, the plentiful food they had on their table, and the comforts that their parents were able to provide for them. It was just dumb luck that they ended up living a life of privilege instead of a life of poverty.  Most didn’t earn what they got… they were just lucky to be born into various combinations of advantages through nothing they did no their own. The lives they were given taught them to think in ways that many in poverty have never been exposed to nor could they conceive for themselves.

So before you let the politicians convince you that the poor are to blame for their circumstances I hope you will really contemplate where you would be in your life if you were Sadie. Then I hope you will go up to her, give her a hug, and help in anyway that you can…including holding our elected officials responsible for taking care of those less fortunate then them.